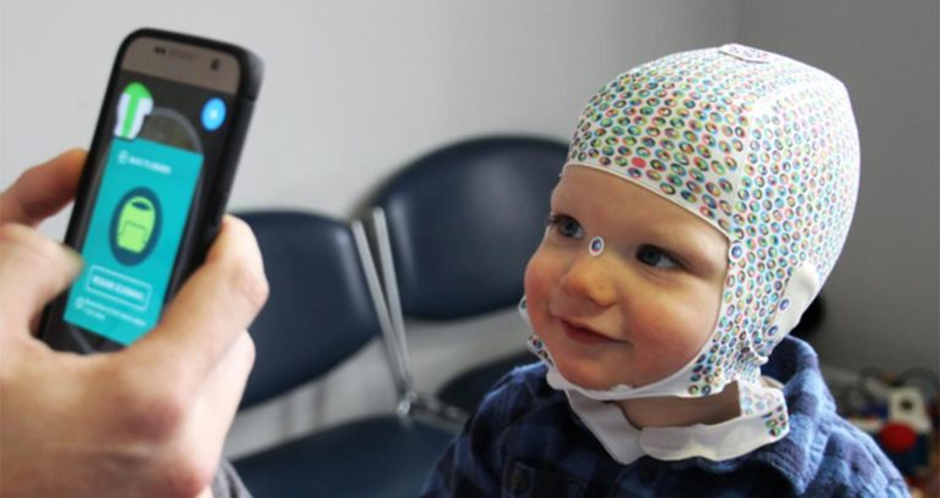 Cranial Remoulding Orthosis is an infantile treatment only that involves a custom-made helmet. The helmet fits to the shape of the head and contains areas of space over the flattened regions. The spaces allow natural growth of the head in these regions over a period of several weeks or months, allowing the structures to correct itself. There are no areas of direct pressure applied therefore ensuring a safe and painless treatment. > Click here to download our Cranial Remoulding Brochure For Parents

Here at Chin and Partners our Orthotists are certified and credited to provide American FDA approved cranial remoulding orthoses and post-surgical cranial helmets. We will assess, scan, measure and monitor the growth of your baby’s head. We actively work with a rehabilitation team throughout this process ensuring your baby receives personalised and effective treatment. 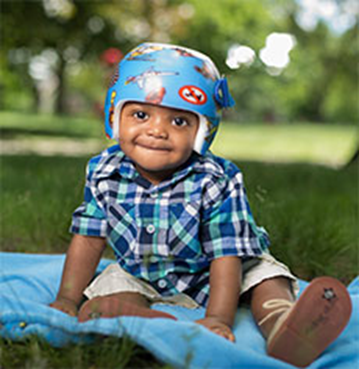 When does my baby need an assessment?

A head-shape deformity is generally noticed soon after the birth of your baby, within several days, weeks or months. General healthcare practitioners, and you as the parent/s or caregivers will be able to detect an abnormal head shape and/or asymmetries in the facial features and ears that do not resolve in several days. In the treatment of cranial remoulding we aim for an early initiation to achieve the best outcomes. The ideal age of treatment is 4 to 6 months; however, we can provide a helmet for a baby till the age of 18 months depending on the severity and causative factor.

The duration of treatment varies due to the different severities and asymmetries present. The orthotic treatment is often used in conjunction with paediatric physiotherapy, osteopathy, chiropractic’s etc. 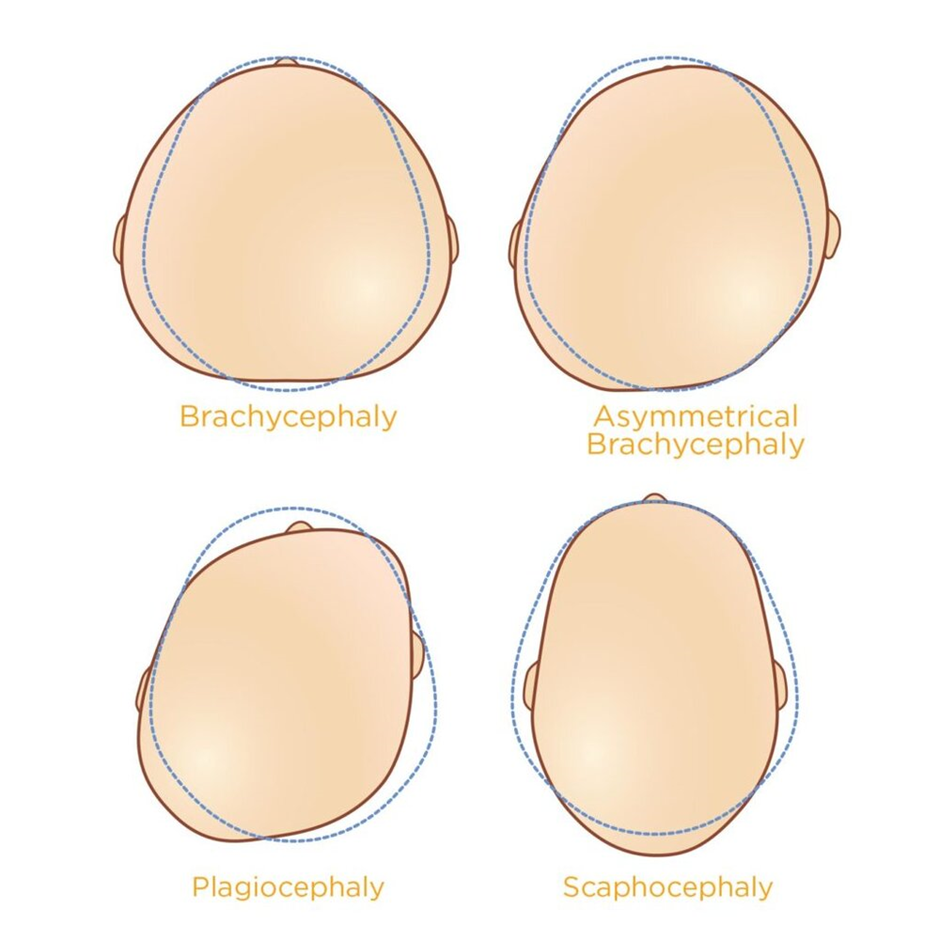 Deformational or positional plagiocephaly often called “flat-head syndrome” referring to the flattening on one side at the back (posterior aspect) of the head and bossing or prominent area of growth on the opposite frontal (front) aspect.

Deformational asymmetric brachycephaly is often used to describe a head shape which can be described as a combination of both plagiocephaly and brachycephaly characteristics.

The baby’s head shape is disproportionately wider compared to its length but it also has a certain amount of asymmetry involved. It may include asymmetry of the forehead and facial features too.

Deformational brachycephaly refers to full flattening across the back of the head or flattening at the occipital bone. The anterior-posterior measurement (front to back) appears smaller than the medial-lateral measurement (side to side).

The baby’s head appears wider and facial asymmetry is also involved. The area at the top of the head or the cranial vault appears higher. This occurs due to the growth of the baby’s brain accommodating growth in limited space. You may notice that the ears of the baby stick out as well.

Deformational scaphocephaly refers to the long, narrow shape caused by the consistent side-lying positioning of the baby.

The cranial vault appears high and bossing or prominent area of growth of the anterior (top) and posterior (back) aspects of the head occurs.

How we choose the product / service

At Chin and Partners, we conduct consultations from 20 to 40 minutes. We assess, measure, scan and fit of the cranial remoulding orthosis/helmet. Babies do not usually make the most compliant patients, but we aim to provide a safe and relaxing environment for your baby and you to be comfortable.

The initial appointment entails us getting to know your baby and you as the parent/s or caregivers. We complete a full assessment of your baby’s head shape and discuss the possible methods and avenues of treatment. We will then discuss the treatment costs and procedures.  Once all parties are informed and in agreement, we can  complete the scanning of your baby’s head which we then use for the manufacturing and fabrication process. We understand the complexities surrounding this process and insist that parents  ask us questions so that we  resolve any potential issues and doubts.

Chin and Partners have two qualified orthotists that are certified for this specialised treatment.

Chin and Partners has partnered with Orthoamerica to provide this specialised service. Orthomerica STARband has provided us with a variety of different colours and patterns to ensure that we have the best compliancy from our little patients.  STARband has a variety of styles to accommodate the different head shape deformities. We can provide the following styles for the best possible treatment outcomes:

How do I know if my infant needs a cranial remoulding orthosis?

There are certain signs that may indicate that your infant needs a cranial remoulding orthosis. However, please keep in mind that some degree of asymmetry in the skull is normal for everyone, so it is the magnitude of the asymmetry that indicates whether treatment with a cranial remoulding orthosis is warranted. If you recognize that your infant’s face is not symmetrical, their head is higher or wider than normal, or that there is flatness on the back side of their head, you may want to visit your physician for further assessment. After 2 months of no or very slow improvement from a physiotherapist or chiropractitioner your baby should be brought in for an assessment.

What is the ideal age for cranial remoulding orthosis treatment?

The best age for treatment is between 4 and 7 months when the skull is growing at the fastest rate. However, cranial remoulding orthoses can be used successfully between 3 and 18 months of age. Caregivers should try to reposition the baby for at least two months prior to initiating treatment with a cranial remoulding orthosis unless the infant is older than 7 months. At this point, infants can reposition themselves, and caregiver efforts to reposition are often futile.

What if my paediatrician tells me that my infant’s head shape will correct on its own?

Historically, many head shape deformities present at birth disappeared within about 6 weeks because babies were placed in several different positions during the day and slept on their tummies at night. Since the Back to Sleep program was initiated in 1992, these head shape deformities often persist because babies sleep on their back all night and spend extended time on their backs during the day in infant carriers/ prams, swings, car seats, etc. Parents must be vigilant about changing the infant’s position more than in any other period of child rearing. Babies that spend most of their time on their backs in the early months roll and crawl later than usual, which results in even more time before the infant can actively reposition themselves. The best way to help your infant’s head correct “on its own” is to place your infant in a variety of positions during the time your infant is awake and supervised. This will encourage your infant to actively move their head through a full range of motion, strengthen their neck, shoulder and trunk muscles, and minimize pressure on the back of the head. More suggested repositioning activities are available in “Tummy Time Tools”, a document that can be downloaded from Orthomerica’s website. It is possible that your efforts to reposition your infant will be rewarded with a more symmetrical head shape that does not require further intervention. However, if your infant’s head does not change after two months of alternate positioning, make sure your paediatrician understands that you have tried prone and other positions to help make the infant’s head more symmetrical, and the skull has not corrected. Then ask your paediatrician if your infant would benefit from a cranial remoulding orthosis, and/or request a referral to a craniofacial specialist.

Why is treatment more effective between 4 – 7 months than at other ages?

Even though the head grows fastest during the first 3 months of life, this time period is best spent actively repositioning your infant to encourage more symmetry. Between 4 and 7 months of age, the head grows about 1 cm per month*, and this rapid growth can be harnessed within the orthosis to produce rapid change in the desired direction of growth. At this point, the infant is starting to develop more head control and can tolerate the additional 6-8 ounces of weight from the helmet. It is actually the infant’s own growth that is the most active part of any CRM orthotic treatment program. The orthosis is specially designed to make total contact in the areas of the skull where growth needs to be curbed and allow space in the areas where growth is desirable. Between 8-12 months, the skull still grows quickly, but the rate is reduced to 0.5 cm per month*. Between 13-18 months, the rate drops below 0.5 cm per month*, and the skull begins to get thicker. Change is still possible in these older babies, but change is slower and generally requires longer treatment programs.

What is the difference between a casting and scanning procedure?

Once a cast or scan is sent to Orthomerica, how long will it take to get my child’s cranial remolding orthosis?

Ideally, your child will be fitted with a cranial remoulding orthosis within 14 days of the casting/scanning date to assure proper fit and function. Since most insurance companies require approval prior to initiating orthotic treatment, it is important for the family and/or the orthotic facility to obtain this prior approval before casting/scanning the infant. Delays related to insurance coverage can be lengthy and frustrating because success in treatment is time sensitive and can have an impact on treatment results.

How often will my infant need to see the orthotist for follow-up and/or adjustments?

Frequency of follow-up visits usually depends on the severity of the initial head shape, age of the infant, and individual treatment protocols of the local orthotist. Typically, the infant is seen a week after the initial fitting and approximately every 2 to 3 weeks thereafter, throughout the course of the treatment program. Younger infants may require more frequent follow up appointments since their heads are growing so rapidly.